PUNE: With several projects under Maharashtra Housing and Area Development Authority (MHADA) lying incomplete, housing minister Prakash Mehta on Wednesday suggested that MHADA Act be amended to terminate the contract with private builders who fail to complete projects within the stipulated time as well as include all projects under Maharashtra Real Estate Regulatory Authority (MahaRERA). 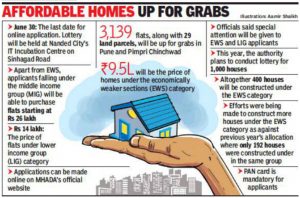 The minister has called a meeting with officials of MahaRERA, housing department, urban development department, Slum Rehabilitation Authority as well as MHADA on Thursday to discuss the proposed amendment as well as inclusion of all projects under MahaRERA. A detailed report will be prepared by the committee and submitted to the chief minister for speedy implementation of projects.
The authority, whose mandate is to build affordable houses, engages private builders to construct new buildings as well as redevelop the old ones. “To expedite pending projects, we are going to introduce a contract termination clause in MHADA Act on the lines of SRA Act and it will be discussed at the meeting,” said the housing minister.
Earlier, the services of nearly 200 developers were terminated for delay in completion of work under section 13 (2) of the Slum Rehabilitation Act (SRA). He said MHADA was planning to introduce similar amendments in the MHADA Act, which will ensure termination and appointment of a new developer.
The committee will mainly address section 33(7) and section 33 (5) under the MHADA Act for timely completion of projects. The amendment will empower MHADA to select a new builder, complete pending construction as well as help those who are forced to live in temporary shelters pending completion of the project.
The minister said that his department is also planning to bring both MHADA and SRA projects under the Real Estate Regulatory Authority (RERA) Act, which will also ensure timely completion of projects and also provides for penalties for builders for non-completion of projects within the stipulated time.
With MahaRERA completing a year, the housing minister has proposed inclusion of government projects under MahaRERA. “We will discuss with MahaRERA officials to bring these projects under the ambit of the regulatory authority, which will ensure a timeline for these projects,” he added.
If the projects are brought under MahaRERA, it will force developers to give bank guarantees and other assurances for their timely completion.
The minister also proposed that MHADA be appointed a special planning authority to ensure that there is no delay in plan sanction to expedite projects under Pradhan Mantri Awaas Yojana (PMAY) scheme. Mehta said by redeveloping MHADA layouts alone, the government would be able to create at least one lakh affordable tenements and another one lakh could be generated through slum redevelopment.