Sela Tunnel, passing through the Sela Pass, would be the longest bi-lane road tunnel in the world after its completion at an altitude of more than 13,000 ft above sea level

Situated along the border between the West Kameng and Tawang districts in Arunachal Pradesh, the Sela Pass is located at an altitude of 13,700 ft above sea level. It is supposed to connect the Buddhist town of Tawang to the rest of the country. Buddhists consider the Sela Pass as a sacred place. The region has at least 101 lakes, including Sela Lake.

Managed by the Border Roads Organisation (BRO), the Sela Pass remains covered with snow and is open for tourists throughout the year. It is only closed in case of landslides owing to excessive snowfall.

Sela Pass has located 78 km from Tawang and 340 km from Guwahati in Assam. Sela Pass is unique and special, as it crosses a sub-range of the Himalayas and acts as a connecting point between Tawang and the rest of India. Owing to the extreme climate, the vegetation is scanty at Sela Pass. During winters, the Sela Lake freezes and is a sight to behold. It is believed to flow into the Nuranang waterfall that finally meets the Tawang River.

A Government of India initiative, the Sela Tunnel, on completion, will be the world’s longest bi-lane road tunnel at an altitude of more than 13,000 ft above sea level. The Rs 687-crore Sela Tunnel project got its name from Sela Pass, which it cuts, to provide connectivity with the rest of India. The aim is to provide an all-weather road through Balipara-Charduar-Tawang passage to Tawang and the areas ahead of Tawang that lie along the Line of Actual Control (LAC) with China. These areas in Sela Pass are generally cut off during winters, because of heavy snowfall, adversely affecting trade and commerce.

As this area is primarily used by the Indian armed forces to monitor the Indo-China border, the Sela Tunnel has been developed, keeping national security in mind as mentioned by the Defence Ministry.

The Sela Tunnel is excavated much below the snow line of the Sela Pass and is being built using the latest New Austrian Tunnelling Method (NATM). The 12.4-km road connecting the Sela Tunnel will shorten the distance between Dirang and Tawang by 10 km.

The speed of excavation to construct the Sela Tunnel is fast, with the breaking down of the escape tube of 1,555-meter-tunnel on July 22, 2021, much ahead of the schedule. Despite COVID-19 restrictions and adverse weather conditions in the area, the pace of work has increased in the last 6-10 months. Expected to be completed on time, Sela Tunnel will be a landmark project at Sela Pass. 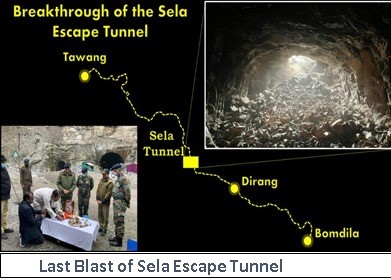 The Sela Tunnel is likely to play a prominent role in the economic development of North-East India. It will be a boon for the people of Tawang, as it will reduce travel time and ensure speedy movement across the Sela Pass. In case of natural calamities and adverse weather conditions, the Sela Tunnel will be considered as a vital link for evacuation.