Among 111 cities in terms of “liveability” in the Ease of Living Index 2018 released by the ministry of housing and urban affairs (MoHUA) on Monday, Pune was ranked first.

Besides Pune, three other cities in Maharashtra – Navi Mumba 2nd), Greater Mumbai (3rd) and Thane (6th) – finished in the first 10. Pimpri Chinchwad’s ranking (69) has come as a surprise to many. Rampur in UP was at the bottom, followed by Kohima in Nagaland and Patna. ,Bengaluru, which has seen congestion become a serious drawback, ranks 58 and Hyderabad 27.

Interestingly, PM Narendra Modi’s constituency Varanasi ranked 33. West Bengal did not participate in the exercise.
Former bureaucrat and urban planner T C Benjamin said “quality of life” in a city is to be assessed on four factor- health, safety, convenience and beauty. “Ease of living, on the other hand, has more to do with convenience than with the other three factors. Convenience implies easy accessibility to various facilities and, to that extent, Pune may qualify as one of the best. I feel happy at that but, at the same time, the rankings leave me worried about the plight of our other cities which apparently are worse than Pune.”

Pune among top 10 in 9 categories 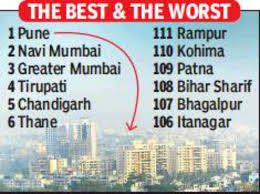 Although Pune did not bag the top rank in any of the 15 parameters the cities were judged on, it finished inthe first 10 in nine categories. Pune’s secured an overall score of 58.11 points out of 100. Besides, it also ranked first in “liveability” in the list of cities with a population ranging between 10 lakh and 40 lakh.

The city secured second position in two categories — assured water supply and reduction in pollution — nd was fourth in health and public open spaces, and eighth in education. However, it ranked 25th in safety and security and 23rd in housing and inclusiveness. It got its lowest rank of 49 for mixed land use and compactness.

Thermax CEO M S Unnikrishnan said the ranking comes as no surprise if one compares Pune to other cities “The quality of liveability in Pune is much better than other cities in terms of availability of water, relatively purer air and affordable rentals. The cost of living in Pune has not gone through the roof,” he said.

Rohit Gera, managing director of Gera Developments Pvt Ltd, said the top ranking for Pune was the result of the efforts of the civic administration as well as citizen engagement and participation in the city’s development.
While some observers attributed the city’s top performance to the Smart City initiatives, other experts questionedthe parameters used in the index to rank cities, pointing out that Pune has been facing challenges on many fronts and that the ground reality hasnot been reflected in the study.
Source:https://timesofindia.indiatimes.com/city/pune/pune-ranked-no-1-city-in-country-in-ease-of-living-rankings/articleshow/65394696.cms