Here is everything you always wanted to know about the Mumbai Pune Expressway, India’s first expressway project

The 94-kilometer Mumbai-Pune Expressway, which currently handles about 60,000 vehicles per day, is one of the busiest arterial corridors in India, linking India’s financial capital with Pune, the automobile manufacturing and education center of Maharashtra.

With an aim to initiate the project, the Maharashtra government appointed the Rail India Technical and Economic Services (RITES) in 1990, to prepare a feasibility report for the Mumbai Pune Highway project. Nitin Gadkari, the then Public Works Department (PWD) minister of Maharashtra, proposed the Mumbai Pune Express Highway route from Kon (near Panvel) to Dehu Road (near Pune) in 1997. Subsequently, the Maharashtra State Road Development Corporation (MSRDC) was awarded the contract to build the highway.

Completed in 1999, the Mumbai-Pune Expressway billed as India’s first expressway project was built at an estimated cost of Rs 1,600 crores. However, the expressway, also known to be the first road project to be completed on time in India, was fully completed only in 2002.

Toll rates on the Mumbai-Pune Expressway have been increased from April 1, 2021.

Note that on the Mumbai-Pune Expressway, travelers are charged toll only for the distance that they travel.

In 2020, public interest litigation was filed in the Bombay High Court, challenging the extension of toll collection on the Mumbai-Pune Expressway till April 2030, even though an audit by the Comptroller and Auditor General (CAG) found that the entire capital outlay of the Expressway was recovered in 2019.

In response, the MSRDC said the CAG audit neglected various aspects of the expenditure and was, thus, inaccurate.

Even though the project was designed for speeds of well over 120 kmph, the speed limit on the Mumbai-Pune Expressway is 80 kmph.

Since the alignment between Khopoli and Lonavala could not be constructed due to viability gap funding issues, the existing alignment of the NH-4 had to be followed by widening it to six lanes. This results in major traffic jams as the traffic from the NH-4 and the Expressway merge in this section. 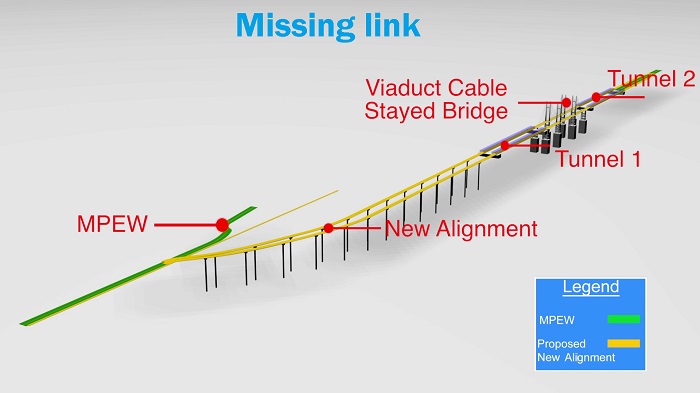 To address this issue, a 13.3-km alternative alignment with eight lanes, popularly called the ‘missing link’, has been planned. It will start at the Khopoli Exit in Raigad and end at the Sinhagad Institute near Lonavala (Pune). Work on the project has been delayed due to the COVID-19 pandemic, forcing the MSRDC to postpone the 2023-end deadline. When operational, the ‘missing link’ will reduce the distance between Mumbai and Pune by nearly six kilometers and will cut the total travel time on the highway by 25 minutes.

Amid a spike in the number of accidents and fatalities and recurring traffic jams on the Mumbai-Pune Highway, the Expressway will soon have an intelligent traffic management system.

The intelligent traffic management system is an artificial intelligence application, linked with high-tech cameras, sensors, and other traffic violation detection systems, installed on highways. The system will provide real-time updates to traffic authorities at the central command center and help keep a check on traffic violations. To be built on a public-private partnership basis, the system will cost Rs 160 crores for 10 years.

Note that speeding, overloaded vehicles, unauthorized halts, and violation of traffic rules have resulted in a substantial rise in the number of accidents on the Mumbai-Pune Expressway.