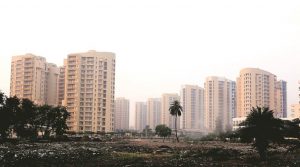 All is far from well in Pune’s real estate market, which is suffering from a sharp slowdown, data from the website of MahaRera has revealed. Maharashtra was one of the first states to notify and adopt the Real Estate Regulation and Development Act, or RERA, in 2016. MahaRera, the authority in charge of implementing this law, was notified in the state in May last year. MahaRera has also become the preferred destination for the redressal of home buyers’ grievances.

But data obtained from MahaRera shows a steady dip in the launch of new real estate projects in Pune district.

Further analysis of the data by real estate analyst Niranjan Kelshikar shows that most of the growth is in Haveli taluka, which spans across Pune and Pimpri Chinchwad, and includes the newly-merged villages of Ambegaon Burduk, Kirtikwadi and others.

Almost 53 per cent of the projects registered in January were from this area, followed by 14.02 per cent in Mulshi, where the Hinjewadi IT park is located, and 11.95 per cent in Pune city.

Fewer real estate projects reflect the impact of the economic slowdown, as well as a cautious approach in the market after the introduction of MahaRera, said sources.

The regulatory Act, especially its stringent Section 18 that allows slapping fines on builders over delayed possession, has acted as a deterrent for many, said Kelshikar.

“Before MahaRera, builders used to underwrite the proposed tenements, and collect the money from the buyer. That money used to be diverted towards completion of the project, which often got delayed,” he said.

This arrangement, Kelshikar said, worked in favour of the real estate industry as most buyers were wary of approaching the legal system.

“Now, as per Section 18, an interest has to be paid in case of delayed possession. This will hit builders, most of whom have started concentrating their capital to ensure completion of their projects,” he said.

With most builders’ capital locked in ongoing projects, and their efforts focussed on meeting deadlines, few have been able to venture into newer projects.